First-timers’ guide to driving in Australia

From buying fuel to road tripping in the outback, here’s everything you need to know about driving holidays in Australia.

Road trip holidays are one of the most interesting, and therefore popular, ways to explore Australia. Whether you want to hug the coast or head off on an outback adventure, you’ll find plenty of scenic road trip routes. There are so many options for hiring a car or campervan, and our road network is so expansive – there are some dirt roads in regional areas and in the outback, but major roads are sealed and well signposted. Plus, fuel is easy to find (though if you are planning to drive in a remote area, it’s wise to carry a spare container of fuel). Once you leave the major cities, traffic is quite light and most drivers are polite – waving hello to fellow motorists is an Aussie tradition.

How to drive in Australia

If you’re not used to driving on the left, hire a car with automatic transmission so you’ll have one less thing to get used to.

Drive on the left:
The most important thing you need to know about driving in Australia is that we drive on the left. If you’ve grown up driving on the other side of the road, just remember that the driver should always be close to the centre of the road. And stay in the left lane unless you’re overtaking (always pass on the right); a broken white line in the middle of the road means you can overtake if it’s safe – if there are two lines you can only overtake when the one closest to you is broken.

Give way to the right:
Roundabouts (traffic circles) operate in a clockwise direction – give way to the right. Give way to the right at intersections, too. If you’re driving a manual (stick shift) car you’ll need to get used to changing gears with your left hand, rather than your right. Indicators and windscreen wipers may also be on the opposite side of the steering wheel than you’re used to, but the break and accelerator pedals are always in the same place.

Licences:
You can drive using your foreign drivers licence as long as it is in English for up to three months, but if it doesn’t have a photo you should always carry your passport with you when you drive. If your licence is not in English you’ll need an International Driving Permit (IDP), which you can get from your local automobile association before you leave home. 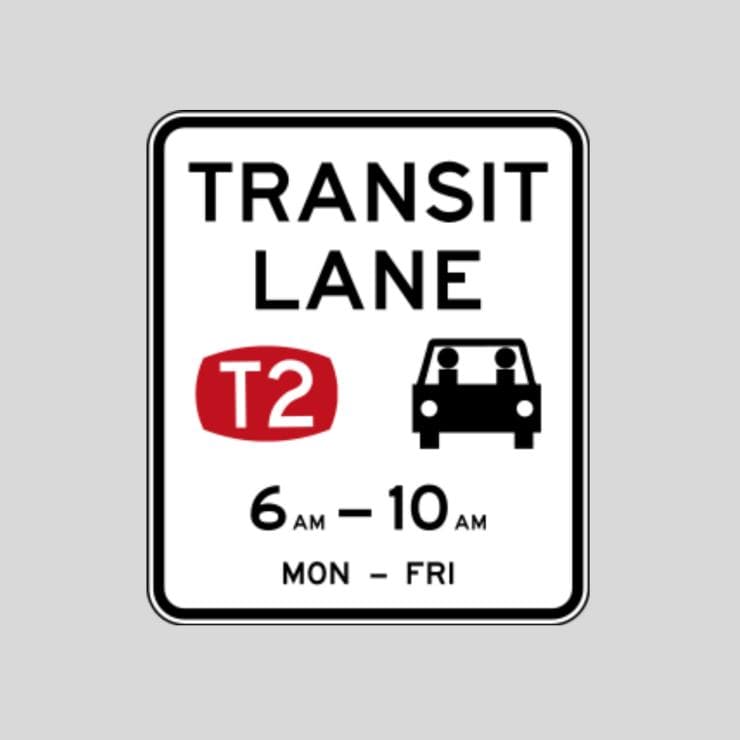 In cities you may see T2 or T3 signs: these are transit lanes and it means you can only drive in those lanes if you have two or three people (including the driver) in the car.

Seatbelts:
Seatbelts are compulsory in Australia, and there are special rules about children’s car seats and baby capsules. If you are riding a motorbike, scooter, moped, e-bike or bicycle, you must wear a helmet.

Mobile phones:
It is illegal to use a mobile (cell) phone while driving – even if you are stopped at traffic lights or stuck in traffic. If you are using your phone for navigation, make sure you have a hands-free cradle for it.

Speed limits:
Australia uses the metric system, so all measurements and speed limits are in kilometres, not miles. You should always drive to suit the weather conditions, but the speed limit in urban areas is 50 kilometres per hour unless otherwise signposted. Most other roads have a maximum speed limit of 100 kilometres per hour, although some highway stretches allow 110 kilometres per hour. On all open roads, however, lower speed limits are frequently indicated, particularly around schools. Don’t be tempted to speed, because highway police are very strict about enforcing speed limits – in some states even driving one or two kilometres over the limit is enough to get you charged, and hidden speed cameras are widely used. The fines are sent to your car hire company and if you don’t pay it could come off your credit card or security bond.

Parking:
Always park on the left-hand side of the road, too – it is illegal to park facing oncoming traffic. Check for any parking signs – 2P, for example, means you can park for two hours, 3P for three – the rules are also strictly enforced and if you overstay the allowed time you will be fined, or your car’s tyres may be clamped.

Railway crossings:
If you come to a railway crossing in country areas, you’ll need to stop before you cross, even if the gates are up. And wherever you are, pedestrians always have right of way.

How to buy fuel in Australia

Fuel types:
Most cars on the road in Australia run on unleaded petrol, although many 4WDs, motorhomes and some campervans may use diesel: always check before you fill up.

Service stations:
In Australia, gas stations are known as petrol stations, but most people just call them “servos” (short for service stations). They are good for toilet breaks as well as stocking up on fuel, drinks and snacks. You’ll find servos at regular intervals on all major highways – in remote areas they are often called roadhouses and will have cafes and accommodation attached.

Access and availability:
In cities and large towns, fuel is generally available 24 hours, but in country areas, especially in the outback, they may be closed at night and on weekends. Diesel is more readily available than petrol in the outback, and many Aboriginal communities will sell Opal fuel instead of petrol, but this is fine to use in any vehicle that normally runs on regular unleaded petrol. Most fuel pumps are self-service, and you’ll usually need to go inside the store to pay after you have filled up.

Tips for driving in Australia

Maps and navigation:
Australian roads are well signposted, but it always best to travel with a map. Outside of cities and big towns mobile (cell) phone coverage can be patchy, so don’t rely on it for navigation. Most car hire companies can also rent you a GPS satellite navigation (satnav) if your vehicle does not have one.

Road tolls:
Many of the motorways in our capital cities are toll roads and need to be paid with an electronic tag or pass. You can hire these along with your car or campervan, or you can buy a visitor pass from the local state roads and traffic authority website before you hit the road. In most cases you can also pay online up to three days after you use the road – the website or a phone number will be displayed at the toll gates.

Etiquette:
Aussies rarely use their car horn, except for emergencies. And most drivers will give a small wave to say thanks if you have let them in to a gap in traffic, or moved over on a narrow country road to let them pass – it’s expected that you’ll wave back in thanks if they help you out, too.

Where to stay on a road trip

Motels, hotels, pubs and hostels:
There’s lots of choice when it comes to finding somewhere to stay on a road trip. Motels offer ensuite rooms and you can often park outside your door. Country hotels – pubs – are an affordable option, but you’ll usually have to use a communal bathroom. Not all small country towns will have a hostel or backpackers accommodation, but they will almost always have a caravan park – sometimes called holiday or tourist parks. These are great options if you want to camp with a tent or have a campervan, but most also have cabins and can be more affordable than motel rooms – most parks also have a communal kitchen and coin-operated laundry facilities. Many are in beautiful spots beside rivers or near beaches. If you are road tripping with your family, they often have resort style facilities such as swimming pools and playgrounds, too.

Campgrounds:
National parks are also great places to camp – campgrounds will always include toilets, but most don’t have showers or drinking water (tap water usually needs to be boiled). In country areas many towns offer free overnight parking for campervans and motorhomes with an onboard toilet (often described as self-contained). Apps such as wikicamps and hipcamp can help you find a great place to pitch your tent, too.

Where to go on a road trip

In the outback and country areas it’s best not to drive at night, as animals such as kangaroos can very difficult to see in the dark.

Coastal:
Victoria’s Great Ocean Road is one of the Australia’s most famous coastal road trips, but there’s plenty of other great routes as well, including the Grand Pacific Drive just south of Sydney, the Great Barrier Reef Drive north of Cairns in Far North Queensland, and the Coral Coast in Western Australia.

Mountains and bush:
The Great Alpine Road is a stunning mountain drive across the Australian Alps, and South Australia’s Flinders Ranges is one of the Australian bushland's most scenic landscapes. If you’re a tastebud traveller, spend a week or two road tripping through the wine regions north of Adelaide, or spend a bit longer on a lap of Tasmania, where every road, it seems, is a scenic one.

Outback:
A road trip through Kakadu in the Northern Territory is a must if you like your adventures wild and untamed. For more outback adventures, the Red Centre Way from Alice Springs to Uluru is truly unforgettable, and if you’re keen on some 4WD action you’ll love the Gibb River Road in Western Australia’s Kimberley region.