From a beginner’s best options to Indigenous snorkelling tours and stargazing overnight stays, here’s how to choose the right Great Barrier Reef tour for you.

There are many ways to explore the Great Barrier Reef, so how do you choose the best tour for you? Cairns is one of the closest mainland jumping-off points for the Great Barrier Reef and has the largest selection of reef tours on offer. Whether you’re a snorkeller, a first-time diver or an experienced diver, there are many and varied options. Here’s what you need to know before you go.

Seeing the Great Barrier Reef is an experience on most visitors’ must-do lists. Snorkelling tours are available on most day-trip boats, and most include equipment and lunch. Just pack a camera, reef-safe sunscreen and towel for an experience of a lifetime.

If diving the Great Barrier Reef is a bucket list item you’re itching to tick off, and you’ve never dived before, your best option is to take a trip with an operator such as Reef Magic, Quicksilver or Sunlover Reef Cruises that have permanently moored pontoons.

While these accommodate a lot more people than smaller dive boats, you’ll find that most passengers are snorkellers, so groups of divers are small, making your first dive experience a more intimate (and less intimidating) one. Everyone will be at your (beginner) level.

Pontoons also have very easy entry points, specifically designed for first time divers who may be afraid to take that first leap into the water. Entry will usually be down a few steps to a submerged platform, where you can stand waist-deep to put on your fins and lower yourself down gently. Pontoons such as Sunlover’s Moore Reef Marine Base also have submerged poles to hold onto all the way down to the sandy sea floor.

Discover things to do in Cairns

If you want to spend as much time as possible underwater on the Great Barrier Reef, it’s best to book a trip on a dive liveaboard. Stay one or two nights on liveaboards such as Pro Dive Cairns’ ScubaPro or Divers Den’s OceanQuest and fit as many dives in as possible, starting before breakfast and continuing until after dark.

On Osprey Reef one of the highlights is a shark-feeding dive site set up in a natural underwater amphitheatre where you can safely observe dozens of reef sharks in a feeding frenzy, and on the Ribbon reefs, meet giant potato cod at ‘Cod Hole’.

In June and July there is also the opportunity to swim with dwarf minke whales, an experience unique to the Great Barrier Reef.

Learn more about diving on the Great Barrier Reef

If you’d like to learn about the reef’s biodiversity, restoration efforts and how you can help, book a dive with one of several operators that are actively involved with reef restoration and coral nurturing programs.

Many tour companies support research and conservation programs by providing marine scientists easy access to the outer reef. Reef Magic Cruises, in collaboration with James Cook University and local Indigenous rangers, recently installed a system of star-shaped frames called ‘Reef Stars’ which form a stable base for young coral outplantings to grow on areas of the reef that were damaged during Cyclone Yasi in 2011.

Others, including Passions of Paradise and Wavelength Reef Cruises, encourage staff to volunteer on coral nurturing programs, helping to maintain coral nurseries and out-planting seedlings to degraded parts of the reef.

Most will also have a Master Reef Guide on board to explain the reef’s intricacies, so be sure to book onto a guided snorkel with one of these master storytellers to learn first-hand about the challenges to and resilient nature of this incredible ecosystem.

Some tour operators have programs you can get actively involved with such as Sunlover Reef Cruises’ Marine Biologist for a Day which teaches participants about reef ecology, climate change, marine life identification and predators such as the crown-of-thorns starfish.

Anywhere you are on the reef, talk to the tour operator’s resident marine biologist about the Eye on the Reef program, a citizen science initiative that allows divers and snorkellers, via a simple app, to contribute to the massive task of surveying the reef and reporting anything unusual such as coral bleaching or the sighting of crown-of-thorns starfish, to the Great Barrier Reef Marine Park Authority (GBRMPA) to help them monitor the reef’s health.

Find out more about the coral nurturing program

Dive and snorkel with Indigenous guides and learn Dreamtime stories of the Great Barrier Reef. 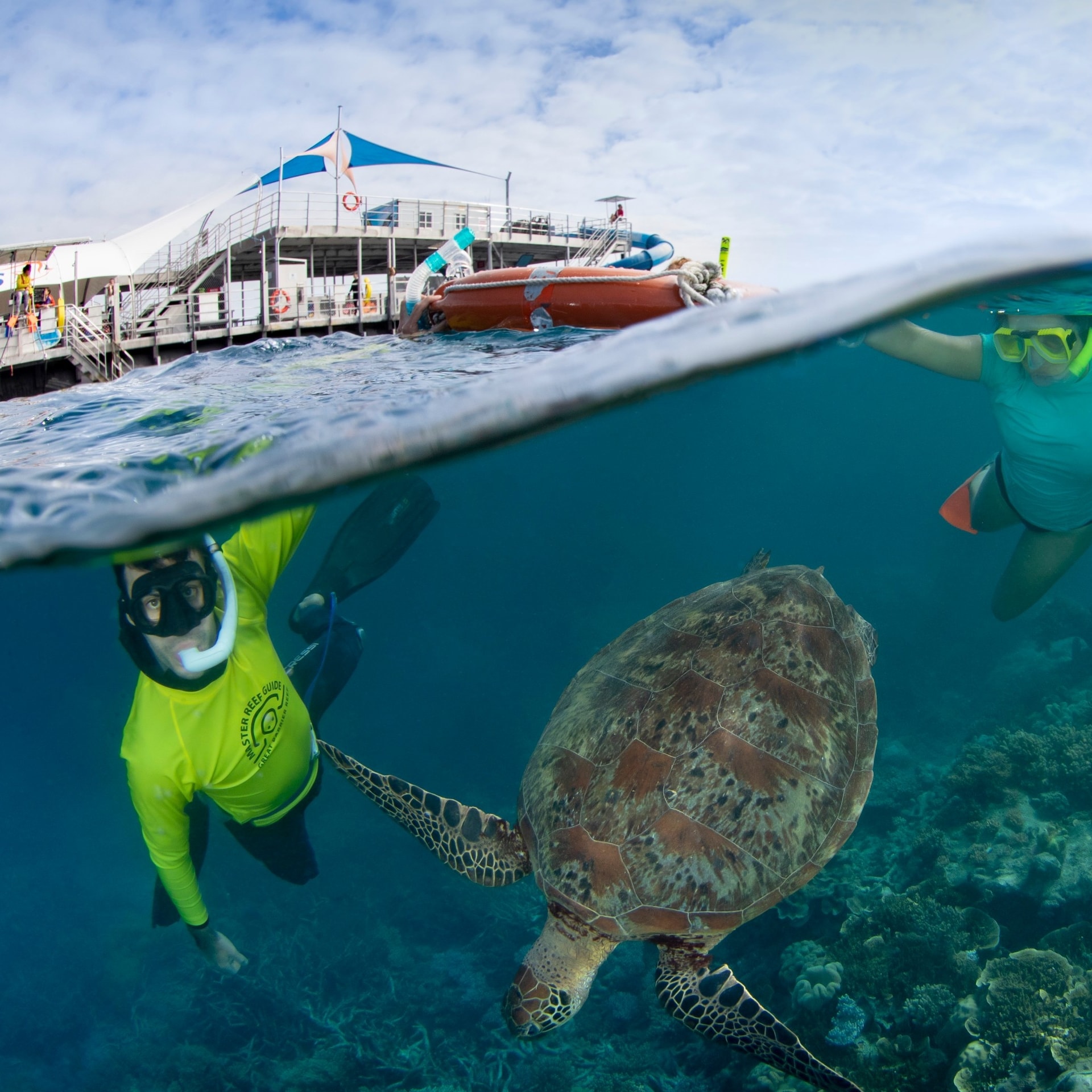 Book a guided snorkel with a Master Reef Guide for a deeper understanding of the reef. These master storytellers will deeply enhance your experience.

Learn about the Great Barrier Reef’s cultural significance on a snorkel or dive tour with an Indigenous ranger on Dreamtime Dive & Snorkel. This is a unique experience which brings together the world’s oldest living culture and some of Australia’s most amazing marine life. Traditional Owners have passed down their Dreamtime stories over tens of thousands of years and the guides on board do a wonderful job explaining their cultural connection to this diverse ecosystem.

Your journey starts with a traditional Welcome to Country before guides share Dreamtime stories as you make your way to the outer reef. Guests will also have the opportunity to try clapsticks and firepoles as well as watch traditional dances and a didgeridoo demonstration. Once at the site, guides will accompany you on a snorkel tour and share the Dreamtime stories of the marine creatures you see.

Stargazing on the Great Barrier Reef 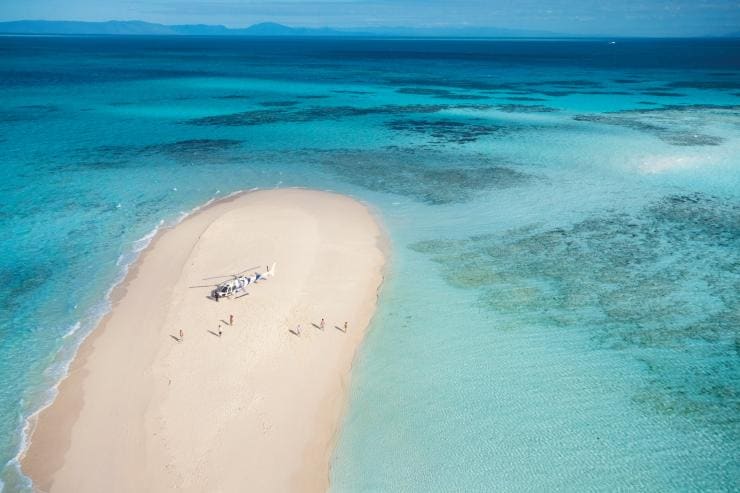 Sleep under the stars and above the reef on an unforgettable overnight adventure that offers exclusive access to the reef once the day trip tours head back to the mainland.

The Sunlover by Starlight experience starts with a day trip to the outer reef, where you can snorkel or dive, before waving goodbye to the day trippers. With the entire reef to yourselves, take one last snorkel or glass bottom boat tour, marvelling at the different species that come out as the sun descends.

After a full day of discovering the marine life of the Great Barrier Reef, it’s time to relax with a drink and a delicious dinner while taking in an epic reef sunset. You’ll spend the night in a comfortable swag (traditional Australian canvas sleeping bags with internal mattresses) on the upper deck of the pontoon, gazing at the Milky Way while the gentle sound of water lapping lulls you to sleep. With no light pollution, the night sky above is every bit as spectacular as the Great Barrier Reef below. Enjoy a peaceful morning on the reef as you rise with the sun, have an unhurried breakfast and another snorkel before the day boat arrives for another full day of snorkelling and diving.

Find out more about Sunlover by Starlight