Here’s where to encounter Darwin’s vibrant Aboriginal culture and enrich your visit to this northern city.

As Northern Territory’s capital, Darwin is your gateway to incredible outback experiences. But it’s also home to the Aboriginal Larrakia people, the Traditional Owners of Darwin’s land and surrounding sea. Aboriginal faces adorn the city centre’s tall buildings, Aboriginal sculptures and public artworks are found in unusual places, and Aboriginal art abounds. Here’s how you can experience an ancient culture that’s very much alive in an urban setting. 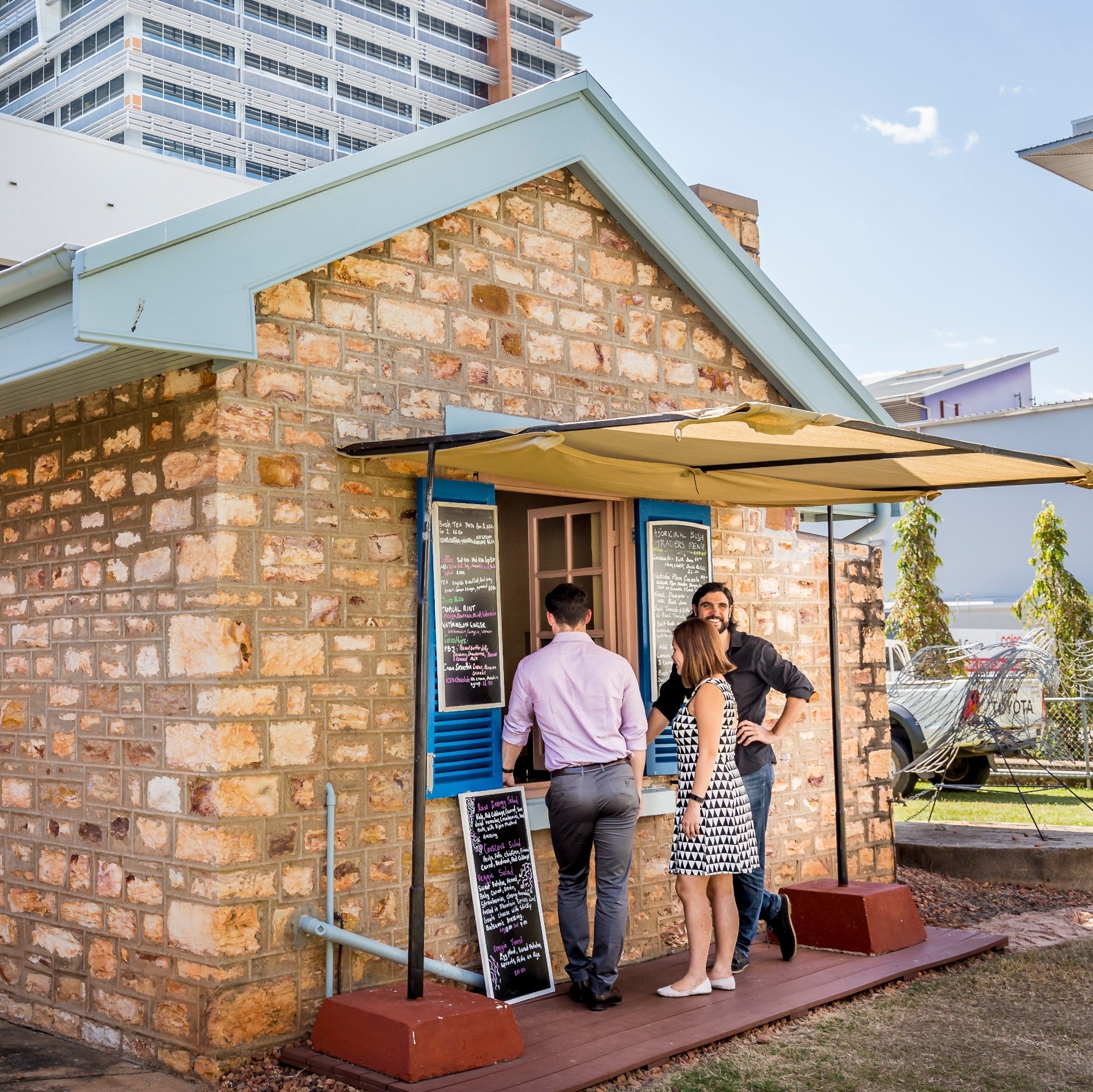 The Kakadu plum in the jam you’ll find at Aboriginal Bush Traders contains up to 100 times as much vitamin C as regular oranges.

Your first stop should be Lyons Cottage, on Darwin’s waterfront Esplanade, a few minutes’ drive from the city centre. Here, in this historic stone house, you’ll find Aboriginal Bush Traders. This multi-faceted, not-for-profit organisation sells arts and crafts from Aboriginal artists and community art centres, and operates a bushfood-inspired café with outdoor seating.

Discover the beauty of Aboriginal art

Darwin is one of Australia’s most vibrant art destinations, and the city’s galleries provide plenty of opportunities to buy Aboriginal art to take home. Parap, less than a 10-minute drive from the city centre, is home to not only an excellent Saturday morning market but a host of galleries showcasing Aboriginal art. Head to Outstation Gallery or the Northern Centre for Contemporary Art to browse what’s on display. In most galleries you can also ask to see what’s in the stockroom.

Closer to the city centre, the Museum and Art Gallery of the Northern Territory is home to a collection of Aboriginal art that includes paintings and carvings from the Territory’s most outstanding Aboriginal artists.

Nestled between the city centre and the Museum and Art Gallery of the Northern Territory is the 42-hectare (104-acre) George Brown Darwin Botanic Gardens. Head into this lush oasis to find the Matboerrma Walk, which reveals how the Larrakia people use native plants for traditional purposes.

Download the Darwin Botanic Gardens Android or iOS app and listen to Larrakia stories that guide you along the trail, showcasing 12 types of trees and how Aboriginal people use them in daily life.

Northern Australia is famous for having two distinct seasons - the wet and the dry - but in Darwin’s pedestrian-only Smith Street Mall, you can learn about the more nuanced Aboriginal seasonal calendar via helpful signage.

The Bininj/Mungguy people of the Kakadu region, about a two-hour drive south-east of Darwin, recognise six seasons. Yegge, for instance, runs from May to June. It signals the arrival of dragonflies and prompts Aboriginal people to “clean the country” by burning woodland to encourage new growth for grazing animals. The mall’s lighting changes throughout the year to reflect these six seasons. 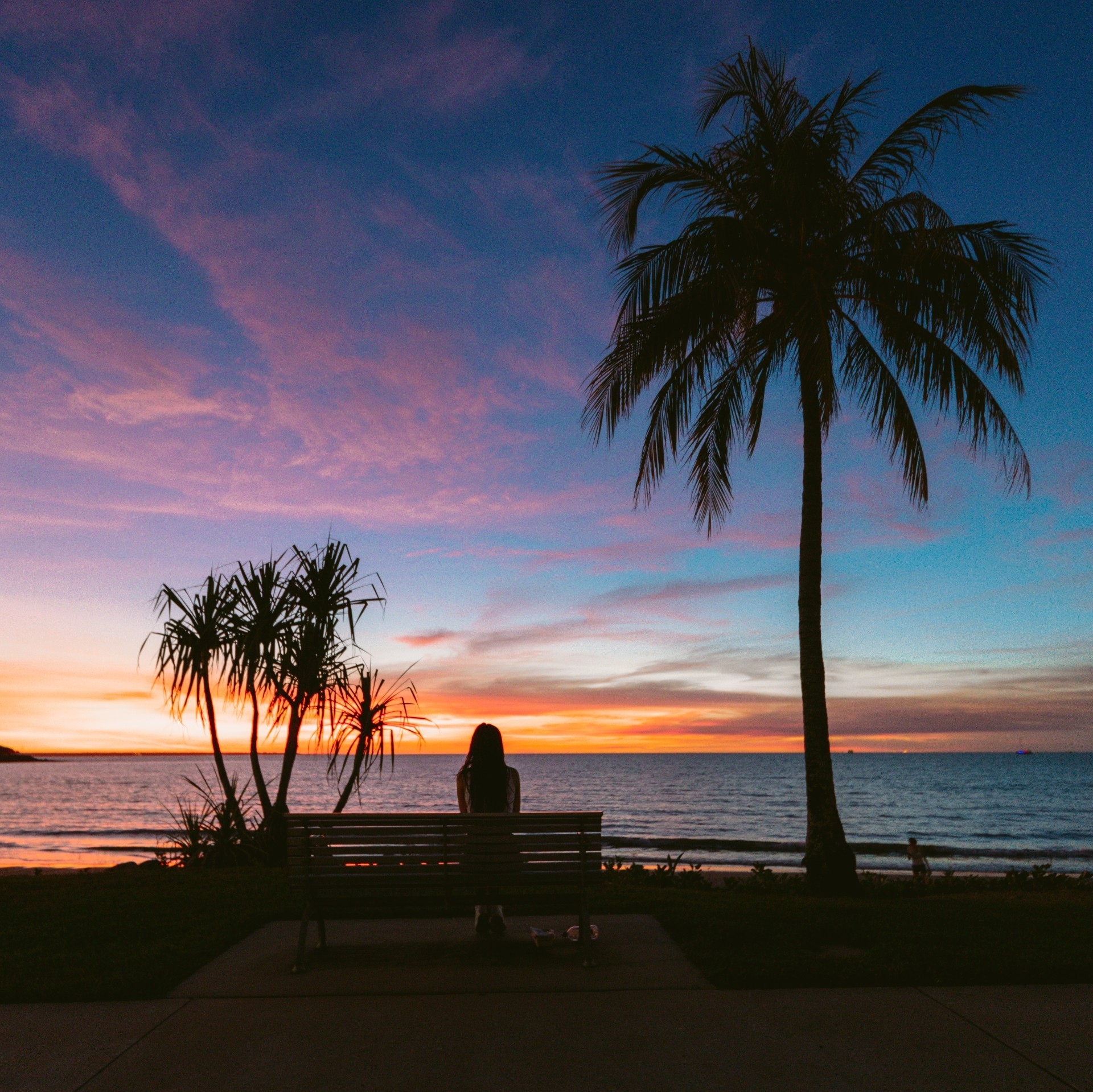 The Supreme Court of the Northern Territory, near the Darwin Waterfront Precinct, is a bold example of neo-colonial architecture. It’s also home to Norah Nelson Napaljarri’s mosaic, Yiwarra Jukurrpa (The Milky Way Dreaming), which depicts the Dreamtime legend of seven sisters who escape their pursuer by turning into stars.

The man turned into the morning star – and as such can never reach the sisters in the night sky. For the best perspective on the work, which is inlaid into the foyer floor, look down from the fourth floor of the building.

Thanks to the annual Darwin Street Art Festival, which launched in 2017, the tropical city’s centre is a canvas for dozens of photogenic large-scale murals. Prowl the inner-city streets and laneways to see super-sized images of local Aboriginal heroes.

Dominating Austin Lane is The Multidimensional Man, a 29-metre-high portrait of Hilton Garnarradj, a guide from Arnhem Land (a vast wilderness east of Darwin). Directly opposite is a painting of Dr G Yunupingu (known as Gurrumul when he was alive), a blind singer from Arnhem Land’s Elcho Island who became famous around the world for his ethereal vocals in his native language.

On West Lane, a five-minute walk from Austin Lane, you can find a seven-storey-high depiction of “sistergirl” (transgender woman) and drag performer Shaniquá TiwiSista, from the Tiwi Islands, a 30-minute flight north of Darwin.