The best day trips from Sydney

Drive a few hours out of Sydney to find fresh produce, world-class wines and beautiful beaches and coastline.

Take a break for the day and head out of Sydney. You can take a beach break along the South Coast and learn to surf, you can walk in the footsteps of the first Aboriginals at the Royal National Park or you can taste wine at one of the oldest wine regions in the country. 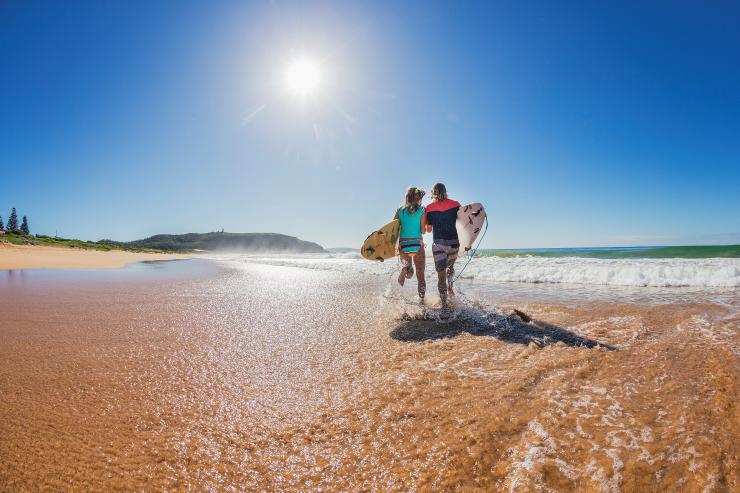 Palm Beach is the setting for Summer Bay, the fictional beach in the television show Home and Away.

Where: Just over an hour drive from the city centre.

At the apex of Sydney's stunning Northern Beaches is Palm Beach, which sits on a narrow peninsula surrounded by golden sand and sparkling water. Take a coffee stop on the way up at The Boathouse, a wooden cottage right on the water where you can try the buttermilk scones with fresh strawberries with your caffeine hit. Once at “Palmy”, as the locals know it, take a swim at the beach or climb to Barrenjoey Lighthouse. The Barrenjoey Head Aquatic Reserve walk to the lighthouse starts with a stroll along a small patch of beach, where jet skis create swirls of whitewash in Pittwater. When the track curls inland you can choose to go straight ahead on the Service Road or take the steeper, shorter Smugglers Track. Halfway up you get an amazing view back along the twin crescents of Palm Beach and Pittwater that bracket the lush headland.

Plan your trip to Palm Beach

Where: A one-hour drive south of the city centre.

The Royal National Park offers 15 hectares (37 acres) of thick bush, clifftop walks and hidden swimming spots. Walk the beginning section of the 26-kilometre (16-mile) Coast Track, where the traditional owners – the Dharawal people – used to gather on rocks and create art. Nearby you can see engravings that are more than 1000 years old, find shell middens and discover Depression-era cave dwellings where hard-up locals used to live. In whale watching season (May to November) the cliffs are a great places from which to spot humpback whales as they head along the coast. You can finish off with a dip at Garie Beach.

Where: Just under a two-hour drive west of the city.

The Blue Mountains offer forest walks through ancient trees and ferns, the famous Three Sisters rock formations at Echo Point Lookout, and fabulous food. Stop in Medlow Bath for a high tea at the opulent Hydro Majestic Hotel, which underwent a massive makeover in 2015 and now offers excellent tea and cakes in its Art Deco surrounds. Have lunch at historic Lochiel House, a fine diner in a historic coach house where you can lunch on steak tartare or grilled octopus. On the way back to Sydney, take the back road, the Bells Line of Road, and call in at Bilpin Cider Co, where you can sample the local brew made from fruit grown in the surrounding valley.

Find more to do in the Blue Mountains 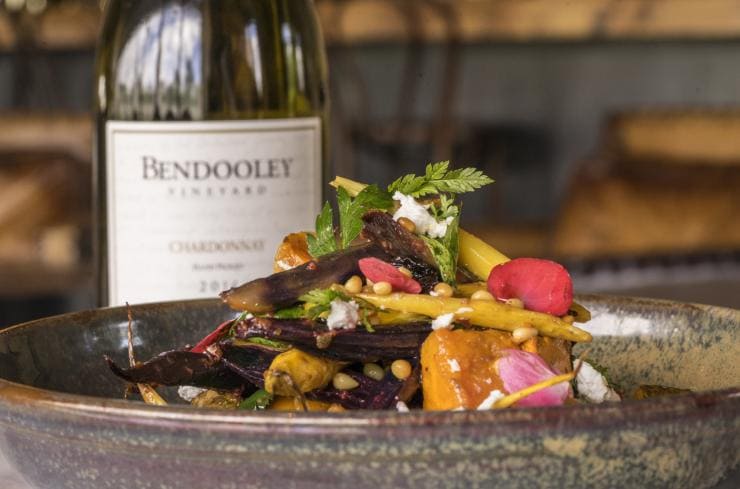 The Southern Highlands is also home to a number of wineries where you can enjoy a flight of cool-climate wines or a long lunch overlooking the vineyards.

Where: A one-hour drive south-west of the city.

The New South Wales Southern Highlands is a region of rural townships set among rolling hills and state forest. At Bowral visit the Bradman Centre, a cricket museum in honour of Australia's most famous player, Sir Donald Bradman. Shop for antiques at Dirty Janes, a vintage market, or grab a bite at the Mill Café in a huge old building with a giant cockatoo mural on the wall. Dine on delicious modern Thai food at Paste in Mittagong, or head to Berrima, to browse the shops and enjoy a drink at the historic sandstone Surveyor General Inn, built in 1834.

Where: Just over an hour south of Sydney when you pass the Royal National Park.

Take the Grand Pacific Drive, which heads out over the water on the spectacular Sea Cliff Bridge then on to the seaside towns of Wollongong and Kiama. Wollongong and surrounds are full of beaches, small coastal towns and coastal walks and cycleways. At Kiama visit the famous Kiama Blowhole, where the crashing waves are forced up through a hole in the cliff, forming a huge fountain. Play golf at the rural golf course with great views and kangaroos for company, or walk parts of the Kiama Coast Walk, which weaves through stunning headland, rivers and secluded beaches.

Where: About a 2.5-hour drive north of Sydney.

The Hunter Valley, one of Australia's premier wine regions, offers a range of adventurous ways to explore the region, from an early morning hot air balloon to horseriding through the vineyards. But most people come for the food and wine. Have lunch at Muse in Pokolbin, considered the best restaurant in the valley, or try nearby Restaurant Botanica, that has its own kitchen garden. Taste wine at Tyrrell's, a winery that dates back to 1858, try the more modern Tempus Two with its striking cellar door, or sip local bubbles at Peterson House.

Read more about the Hunter Valley

Where: About 2.5 hours south of Sydney.

The Shoalhaven Region has white sand beaches, an emerging foodie scene based around the area's amazing fresh produce, and quaint coastal towns. At Berry, a country town with heritage buildings set among lush farmland, you can get freshly baked bread at the Berry Sourdough Bakery & Café, piping hot treats from the Berry Donut Van and an old-school pub beer at the Great Southern Hotel. Work off your foodie binge at Murrays Beach, where the clear blue waters are ideal for snorkelling. Spot dolphins in the water and kangaroos on the beach in Jervis Bay, or head to Mollymook to stay and dine in luxury at Bannisters.

Explore the best of Jervis Bay

Where: 1.5 hours south from Sydney

The beachy suburb of Wollongong can be as relaxing or adrenaline-fuelled as you like. Along the way, be sure to take a detour for the Symbio Wildlife Park (just off the Princes Highway) to meet the local mammal population of native and exotic wildlife. Continue along the scenic route via the Sea Cliff Bridge and stop for lunch at the Scarborough Hotel. This casual pub has some of the best views of the sweeping coastline. Beachgoers are spoilt for choice in “The Gong” (as it’s affectionately known to locals), with picturesque soft sand beaches, great surfing waves, ocean pools and picnic areas. The most popular option is the swimmer-friendly North Beach, though City Beach in the city centre tends to get wilder waves. Book a private lesson with the Illawarra Surf Academy and learn how to surf with the locals at Thirroul and Corrimal (just north of Wollongong). With more than 40 kilometres (25 miles) of shared paths threaded across the Wollongong coast, cycling is on par with surfing as the local pastime. Rent a set of wheels from South Coast Bike Hire and hit the waterfront cycleway, or for the thrill-seekers, Skydive Sydney-Wollongong will take you on a scenic plane ride over the coast before you make the crucial jump from 14,000 feet up. Largely considered one of the most spectacular skydives in Australia, you’ll get to take in the dramatic views over Wollongong before landing on North Beach.

Find more to do in Wollongong