This five-day journey into the vast Katherine region is a deep dive into an ancient culture that will leave you transformed.

Visitors to the Northern Territory are drawn to the cultural and spiritual richness of Kakadu, Arnhem Land and Katherine. The latter, a tropical town three hours from Darwin, feels a world away from the modern every day, and the journey to get there takes you deep into the outback’s primeval beauty. With a wealth of ancient culture and a good dose of Australiana along the way, this five-day round trip from Darwin takes in the icons of the region as well as its off-the-beaten-path gems.

Day 1: Darwin to Adelaide River, via the jumping crocs 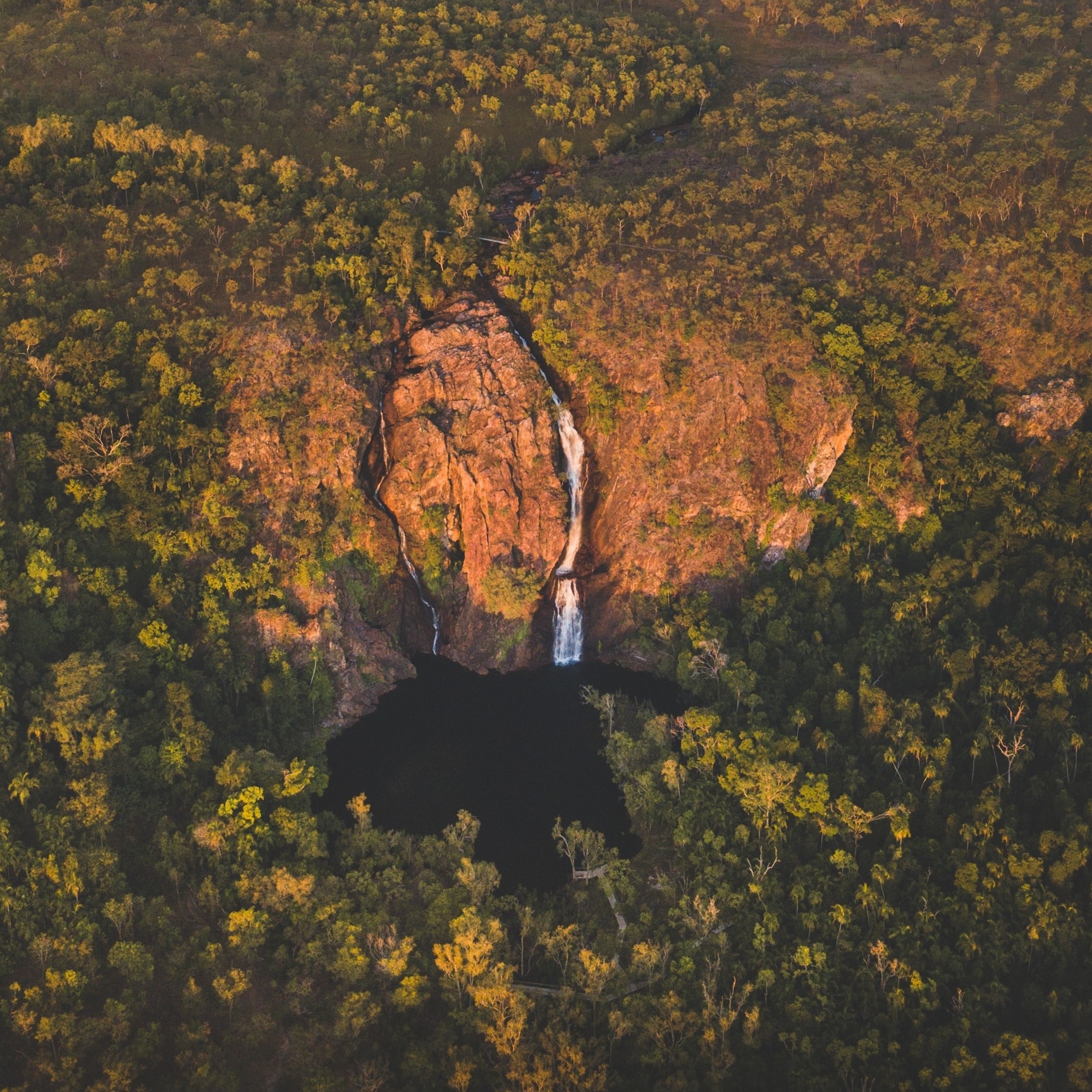 NT Air exclusively operates helicopter flights into Litchfield, and can take you from its Batchelor hangar to secret (and croc-safe) swimming spots inaccessible by road.

Hire a car in Darwin but before you hit the road, take the time to get to know the Northern Territory capital a little better. Darwin has had plenty of facelifts in its day, but none quite as colourful as its Street Art Festival. The city’s back streets were first decorated in 2017 with eight bold, large-scale murals, followed by a further 16 in 2018 and 15 in 2019, with some even coming to life on your phone via augmented reality. Download the map from the website and go wandering.

If you want to go deeper into Darwin’s history, visit the Museum and Art Gallery of the Northern Territory (MAGNT). Exhibits take you back to the harrowing midst of Cyclone Tracy, the terrible height of World War II and the pre-settlement world of Darwin’s traditional owners, the Larrakia people.

Now it’s time to hit the road. It’s a 50-minute drive (and a slight detour) to experience a quintessential Northern Territory experience: a croc-spotting cruise down one of the Top End’s many beautiful rivers. Adelaide River Cruises runs one-hour jumping croc tours at various times throughout the day. Seeing a whopping crocodile leap from the water is something you just have to experience firsthand.

Now double back slightly towards Humpty Doo, and head on towards Adelaide River. Stop in at Batchelor, located on the edge of the massive Litchfield National Park, on the way. The town hosted an airfield during the war; check out the museum before continuing your journey a further half hour until you reach Adelaide River.

Stay: The Adelaide River Inn and Resort is an ideal spot to fill up both the car and its occupants. The pub is bursting with Australiana and is home to Charlie, the buffalo from Crocodile Dundee, who can be found ‘standing’ proudly and very still at one end of the bar; perfect for selfies.

The road from Darwin to Katherine is quite accessible and distances are reasonable – you don’t even need a 4WD.

Now it’s time to head to Litchfield National Park to spend the better part of the day exploring some of its many wonders, from giant termite mounds to stunning waterfalls and idyllic swimming spots. There’s an abundance of walking tracks, as well as a number of tours available throughout the park.

Set off from Litchfield National Park for the 2.5-hour journey to arrive in Katherine in time for dinner; options range from good food in a lovely setting at Fig Tree Bistro to Chinese cuisine at Loong Fong and an outback dinner under the stars at Marksie’s Stockman’s Camp Tucker, just outside of town.

Stay: Katherine’s accommodation caters to all budgets and tastes. For something on the luxury side, consider Cicada Lodge. Those wanting to stay close to one of the area’s most popular attractions – Nitmiluk (Katherine) Gorge – book into Nitmiluk Cabins and Campground. Those on a budget will find plenty of motel and dorm options close to Katherine’s bars and restaurants.

Immerse yourself in Katherine’s ancient culture with a visit to Top Didj Cultural Experience and Art Gallery just outside of town. Create dot paintings and learn how to wield a boomerang.

Katherine, the Northern Territory’s third-largest town, is situated on the banks of the Katherine River and has long been a site of great significance to its Aboriginal owners: the Jawoyn, Dagoman and Wardaman people.

Head to the Black Russian Caravan Bar and grab breakfast and a coffee before perusing local art. The styles and crafts of local artists converge at the Mimi Arts and Crafts centre, which is Aboriginal owned and operated, and showcases the wide range of art Katherine inspires.

Once you’ve explored the town, drive an hour south-east to the best-kept secret in the region – Bitter Springs in Elsey National Park. A spring-fed thermal pool with a temperature of around 34 degrees Celsius (93 degrees Fahrenheit), it’s a great place to unwind (pool toys and floaties are encouraged). Stop for refreshment afterwards at Stockyard Gallery café in the small town of Mataranka, a five-minute drive from Bitter Springs, and then head back to Katherine for dinner.

Find out more about Bitter Springs

For many visitors to Katherine, Nitmiluk National Park and Nitmiluk (Katherine) Gorge is the reason they come. The deep sandstone gorge carries the Katherine River from Kakadu through the town of Katherine itself, and is a haven for saltwater crocodiles during the tropical summer. In the dry season, however, it’s a paddler’s paradise.

While you can explore the national park on foot, the best way to experience Nitmiluk (Katherine) Gorge is on the water. Cruises along the Gorge are available as half-day, full-day or even overnight adventures with Nitmiluk Tours, but the sunset cruise is perhaps the most enchanting.

Those without sea legs may prefer to take flight. Whether by light plane or helicopter, Nitmiluk Gorge from the air offers an entirely different – but no less incredible – perspective.

In contrast to the tourist-friendly Nitmiluk, Umbrawarra Gorge Nature Park – on the way back to Darwin – feels raw and wild (and it’s 4WD-access only during the wet season from October to April). Traces of ancient rock art by the land’s traditional Wagiman owners can still be seen on the walls of the gorge, too.

Though you can walk to the gorge, further trekking must be done through the water. It’s worth the journey, but check crocodile activity before you go.

Back in the car on the Stuart Highway heading to Darwin, you’ll have a greater appreciation for the vast land up north. As they say in the Northern Territory, you’ll never never know if you never never go.

For more information about road trips in the Northern Territory, go to northernterritory.com.