From deep sea and sport to freshwater and fly, Australia offers several types of fishing for avid anglers.

Australia’s waters are teeming with fish. As an island, Australia is known for its abundant seas, but you can also cast out a line as you stand on the banks of a river, float down a mangrove-lined creek or navigate across a calm lake. Here are the types of fishing you can experience in the land Down Under.

The exciting mix of angling species on offer in Australia’s warm and temperate seas varies enormously from one part of our massive island continent to another. Down south, the species list is dominated by hard-fighting and delicious denizens like the handsome pink snapper or squirefish, mulloway, bream, whiting and flathead, to name just a few of the more commonly pursued varieties. Up north, that list grows dramatically to include prizes such as barramundi, mangrove jacks, golden snapper, coral trout and a host of fast-swimming pelagic varieties such as tuna, trevally, queenfish, mackerel and cobia. In some tropical locations, it’s easy to account for well over 20 different species in just a few days of fishing, and that tally is almost sure to include fish you’ve never seen or heard of before, many of which are unique to our bountiful and lightly-fished waters.

Whether you choose to cast a line from Australia’s rugged, wave-lapped shorelines, or venture further out onto the blue briny aboard a well-equipped sport fishing charter boat, the one thing you can be certain of in the Land Down Under is an angling experience you’ll cherish and talk about for a lifetime to come.

Australia’s most famous game fishing arena lies along the outer edge of our aptly-named Great Barrier Reef, between Cairns and Cooktown. Each southern spring (September until December), giant black marlin from all over the Pacific congregate here to spawn. Dozens of “granders” (fish over 1,000 pounds or 450 kilos) are hooked every year, along with hundreds more in the 100 to 900 pound (50 to 400 kilo) range. Far North Sports Fishing and KEKOA Sports Fishing can get you amongst the action.

As iconic and reliable as this giant marlin fishery is, it’s just one aspect of Australia’s incredibly diverse game and deep sea fishing bounty. Those same Barrier Reef waters that are visited seasonally by big black marlin are also a year-round playground for abundant sailfish, narrow-barred mackerel, wahoo, tuna, trevally, mahi-mahi, barracuda and cobia, along with a kaleidoscopic collection of delectable reef dwellers such as snapper, emperor, sweetlip, grouper and coral trout. Northern Conquest Charters specialises in targeting these tasty table fish.

Australian waters are also developing an enviable international reputation for consistency when it comes to targeting the most highly-prized and sought-after of all the big game species: the mighty broadbill swordfish. Daytime “deep dropping” for these hard-fighting gladiators has dramatically improved average strike rates and allowed many visiting and local anglers alike to finally tick this very special box off their personal bucket lists.

You’ll find deep sea and game fishing experiences in numerous locations across the country, from the azure waters of the Mackerel Islands in Western Australia to the blue bays and coral cays of Queensland in the east. Head out on a tour with East Coast Angling or Waterline Charters to take advantage of the bountiful Queensland waters. Or, after enjoying the reefs of Cairns, take a day trip with Cairns Reef Fishing. The local Aussie guides will help you make the most of the seas.

Regardless of your level of ability or the size of your ambitions, you’ll find something swimming in our Aussie seas to stretch your line, your arms and your imagination.

Did you know that one of the largest freshwater fish on the planet lurks in Australia’s placid inland waters? It’s called the Murray cod, but was known as goodoo or ponde to the original Australians, and played a pivotal role in Aboriginal Dreamtime (creation) stories. With a mottled green body shaped like a beer barrel and a mouth large enough to inhale hapless ducks, the mighty Murray cod looks rather like a grouper, but behaves more like an over-sized bass; it’s an extremely thrilling target for anglers using lures or flies. As a bonus, the waters these fish frequent are an absolute delight to visit. Sweeping bends, rocky bars and overhanging vegetation provide the shadowy nooks where these green-hued predators lurk, hanging almost motionless on their splayed fins.

Murray cod share their beautiful rivers and lakes with several other wonderful angling species, including the golden perch and silver perch, while the coastal rivers and reservoirs of our south east are also home to feisty, hard-fighting Australian bass. Up north, you can add barramundi, saratoga, sooty grunter and jungle perch to this list, all swimming in pristine rivers and lily-lined water holes that are also home to crocodiles, abundant waterfowl and a host of other fascinating wildlife. So, while we may be one of the driest continents on earth, we also have a great deal to offer the adventurous freshwater fisher.

Book a guided fishing tour that will help you seek out the most promising spots, supply your equipment and take you on the ultimate freshwater adventure.

Fly fishing is one of the fastest growing sectors of the angling world, and Australia is blessed with some of the best fly fishing to be found anywhere.

Trout are not native to this corner of the globe, but they were successfully introduced during the mid-1800s and have thrived in Australia’s cooler areas. The island state of Tasmania, in particular, offers superb “sight fishing” for wild-spawned brown trout in shallow, clear water. Check out Driftwater, RiverFly 1864 and Thousand Lakes Lodge for Tasmanian fly fishing experiences. Excellent trout fishing also exists on the mainland, especially in the Victorian and New South Wales high country.

But Australia’s freshwater fly fishing isn’t confined to its trout waters. Species such as the magnificent Murray cod (which can reach weights of 50 kilos, or more than 100 pounds) are finally beginning to attract the international attention they deserve in fly fishing circles. Elsewhere, the ancient saratoga and Australia’s hard-hitting native bass all provide excellent fly fishing opportunities, as does the highly-prized barramundi, which is found in both fresh and saltwater environments right across the north of the continent.

In the salt, Australia’s northern coastal waters are home to the “big three” of tropical flats’ fishing: permit, bonefish and tarpon. However, each has a uniquely Antipodean twist. Our Indo-Pacific permit (we actually boast two species) is at least as tricky to hook as its Caribbean counterpart, but occurs in far greater numbers. Our bonefish are big and cunning, but often hang out in slightly deeper water than their cousins from other corners of the globe, making them harder to spot. And our tarpon are miniature scale models of their much larger Atlantic brethren, rarely exceeding 8 pounds (4 kg) in weight, but punching well above their modest size. Our fussy and hard-fighting “blue bastard” (a member of the sweetlips family) also provide thrilling flats action.

Throw in golden, diamond and giant trevally, barramundi, queenfish, giant herring (ladyfish), threadfin salmon and barracuda and you’re starting to get a picture of the caliber of shallow water, inshore fly fishing on offer around the lightly-populated north of the country.

But don’t get the idea that the north of Australia has a monopoly on saltwater fly fishing thrills. Our cooler southern seas also teem with fish that will test your mettle and strip backing from your fly reel. Some are familiar, like half a dozen or more types of tuna, our sharp-toothed tailor (called bluefish, elf and shad in other parts of the world), mahi-mahi or dolphin fish and the incredibly powerful southern yellowtail kingfish (an identical cousin of both the Californian and Japanese yellowtails). But there are other less familiar and more exotic contenders on offer, too, like the so-called Australian salmon, which is not a true salmon at all. It’s more a cross between an American striper and a European sea bass, and just as much fun to catch on fly.

Most of the species described can be tackled with #8- and #9-weight fly outfits, but if your aspirations run a little higher, there are few better places than Australia to chase billfish on fly. Indo-Pacific sailfish, black, blue and striped marlin, spearfish, and even broadbill swordfish. They’re all here in great numbers. So why not pack your favourite fly rods and come play? Gavin Platz’s Tie ‘N’ Fly Outfitters on the Sunshine Coast provide specialist Australian saltwater fly fishing advice.

Join a guided fly fishing experience in Hervey Bay to take (some of) the hard work out of landing an epic catch or catch the full list of operators on our operator map. 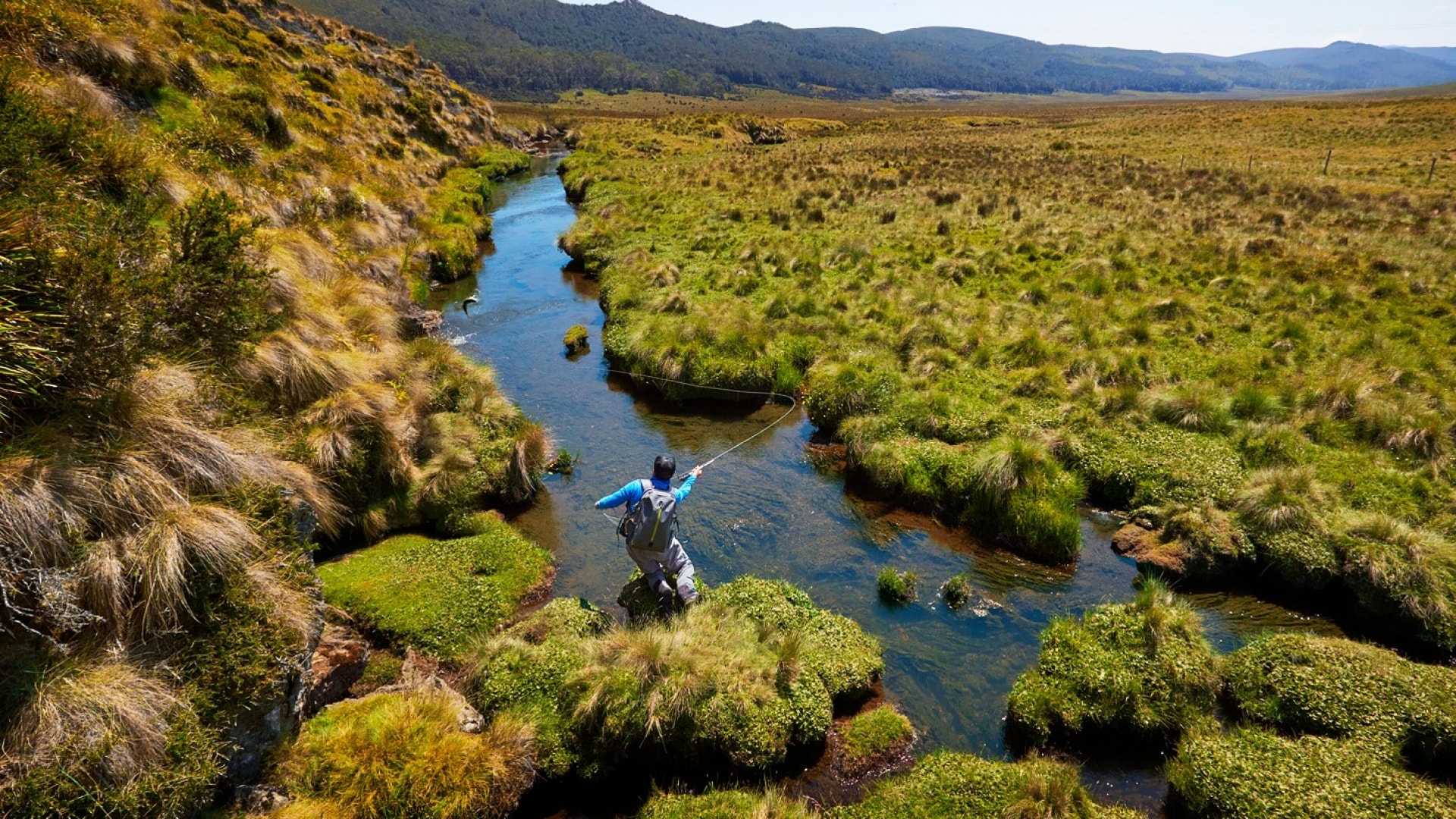 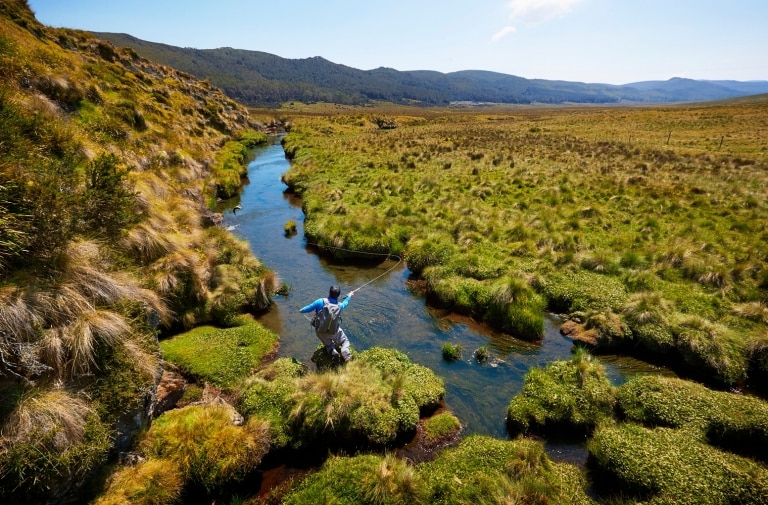 Still in need of a fishing challenge?

Take a look at what Australia's renowned fly fishing writer, caster and angler Peter Morse has to say about our fascinating waters, and the fishing species that lie within them.
Download now