Here’s where the world’s travel editors are going to next in Australia.

If you’re fantasising about your next Australian holiday, you’re not alone. Around the world, some of the media industry’s most highly regarded travel editors are hatching plans to travel Down Under as soon as they can.

We spoke to 11 editors about the Aussie spots on their must-visit lists, which include everything from hip urban enclaves and blissful beaches to awe-inspiring national parks.

Follow their lead and start dreaming up your next Australian adventure.

Stargazing in the Grampians, Victoria

“My friend Budi is an American, originally from Detroit, who is an expert in Balinese mask dancing. I met him when we both lived in Singapore, and now he’s happy as a clam, teaching at the University of Melbourne. He makes the world seem connected.

“When I think of travelling again to Australia (it can’t happen soon enough!), I dream of catching up with Budi in inner-city Melbourne, and then (fortified by flat whites and avocado toast) we’d take a road trip to the Grampians National Park. I have never been, but I’m wild about going.

“I would love to hike for a few days, commune with kangaroos, and be awestruck by Aboriginal rock art paintings. It’s even conceivable that I will sip some shiraz. The best part is that I know I will meet some amazing storytellers along the way. Australians are the best storytellers. I’m a good listener. And the stars will shimmer.”

Get to know the Grampians

“Many years ago, my family would travel each summer from Canberra to Mollymook, known to us as ‘Molly.’ We always rented the same cottage – and it’s still there, gnarled frangipanis and all. But now I stay at chic Bannisters Pavilion. I motor to the heritage village of Milton for homewares shopping and a stroll on the village green, and buy takeaway from The Fish Shop, at Burrill Lake, where the chips are properly fat and old-fashioned.

“I always squeeze in a seafood supper at Rick Stein at the Bannisters mothership, as well as a coastal or headland walk. I love the Coomee Nulunga Cultural Trail, rich with bird calls, springy native heath and lookouts to spot passing whales in season (May to November).

“I drive down along the coast from Sydney but return via Batemans Bay and Canberra, passing state forests with glades of ferns, tall turpentines and swamp gums. It’s an Australian pilgrimage of the most nourishing kind.”

Get to know Sydney's south coast

If your budget doesn’t quite stretch to a suite at Saffire Freycinet, apply for a camping permit for Freycinet National Park. Spots are limited, so book ahead.

“I arrived in Hobart on the first day of Dark Mofo in 2018 and immediately knew that my week-long stay in Tasmania would be far too short. Strolling through a city illuminated with red lights, I realised that there are few places on earth that embrace art with such originality and bravura. The cool art scene aside, Tasmania’s raw, natural beauty is the best tonic one could wish for.

“I’d love to stay at the stellar Saffire Freycinet again and wake up to a panoramic view of the Hazards mountains, which look particularly alluring at sunrise. One place I’m definitely returning to is Freycinet Marine Farm – I still think of that afternoon when I put on waders, walked down to a table on the water and savoured freshly shucked Tasmanian oysters with a glass of local bubbly.

"Given the myriad gourmet experiences, hiking is a must, and there’s no shortage of options in Tassie. The relaxing Wineglass Bay walk is unforgettable, and I’m keen to explore other trails and hopefully encounter a friendly wallaby along the way.

“I love the healing power of nature. To breathe in the crisp air, enjoy the luxury of space, and sleep under the star-studded Tasmanian sky – that’s what travel dreams are made of.”

Get to know Freycinet National Park

Dining in and around Melbourne, Victoria

“From the glorious sunshine to the long stretches of sandy beaches, vibrant cities and general feel-good vibes, Australia is one of those countries I would happily move to in a heartbeat. As a frequent visitor, there isn’t much I haven’t explored, but for a good dose of urban culture, combined with the surrounding wine country and the magnificent Great Ocean Road, a trip to Melbourne is my go-to.

“I’d spend a few days restaurant- and bar-hopping, calling in on favourites from Bar Margaux to The Everleigh, and sampling others – such as Atlas Dining – that are on my ever-expanding to-try list. I’d also make time for a drive out to Jackalope on the Mornington Peninsula, where I’d sip cocktails in the infinity pool against a backdrop of rolling vineyards.”

Get to know the Mornington Peninsula

“I stumbled upon the town of Coral Bay on a road trip around Western Australia more than 15 years ago. I drove for a week or so through the desert, seeing barely a soul other than the roadhouse folks until I reached what was, quite literally, an oasis.

“The fringing coral of Ningaloo Reef is so close to the shore that anyone can explore it. It’s the ideal snorkelling experience for someone without scuba certification. The joy of wading off the beach and plunging into the water to see that technicolour reef was extraordinary. I spent several days exploring Coral Bay for a story, and I loved the fact that its UNESCO World Heritage status protects the area from overdevelopment. So it will always stay small – and in doing so, safeguard that reef. I cannot wait to go back.”

Get to know the Coral Coast

Experience the rugged Top End in the Northern Territory 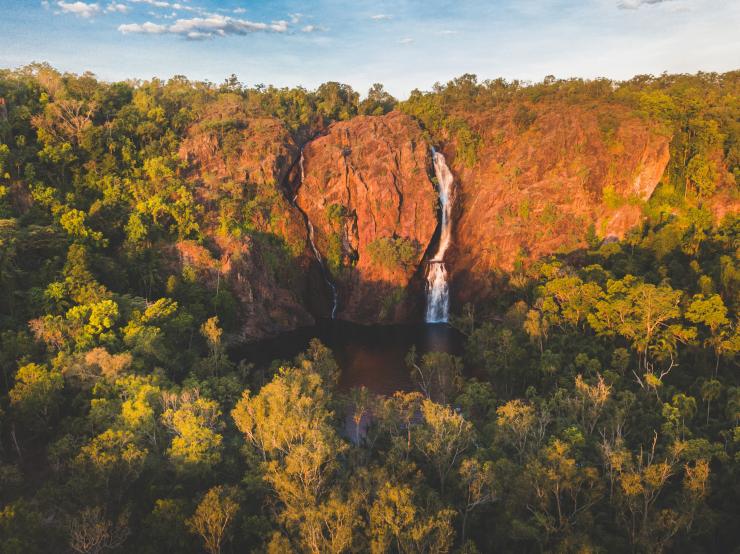 Wangi Falls has free Wi-Fi, so you can upload your favourite pics of its amazing natural outback beach.

“I’m dreaming of a return to the ruggedly handsome Top End in the Northern Territory. It’s home to some of Australia’s most stunning tracts of national parkland. My favourite Northern Territory destination, Litchfield National Park, may lack the international recognition of its big sister Kakadu, but it’s just as dramatically beautiful – and, best of all, it’s a mere 90-minute drive from Darwin.

“On your way to the park, you’ll pass through the outback town of Batchelor – be sure to stop at Batchelor Butterfly Farm to admire owner Chris Horne’s brilliant winged specimens. Then it’s into the park. Buley Rockhole, Litchfield’s most popular attraction, offers a series of crystal-clear swimming holes with peachy-sand floors and an underwater world perfect for savvy snorkellers.

“Another top spot is Wangi Falls, where you can swim in an enormous sand-fringed pool fed by dual waterfalls. Amazingly, there’s a café at Wangi Falls that serves incredible mango cheesecake.

“When you’ve finished swimming, drive back to Batchelor for crispy pizzas and live music at the Rum Jungle Tavern, a classic outback joint full of larger-than-life locals.”

Get to know Litchfield 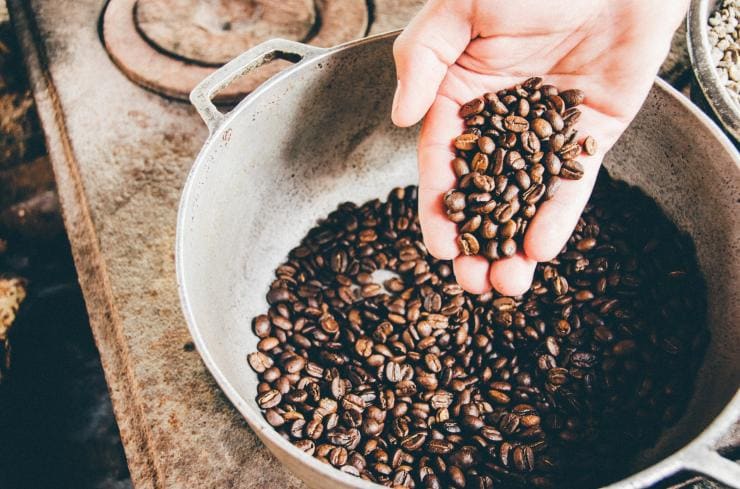 Raven Coffee, the café that Mark’s family loves, roasts its own beans on site.

“Some years ago, I took my eldest son on his first farm visit. We flew into Perth, hired a car and spent a week making our way south via a series of farmstays – this wide-eyed toddler seeing and feeding animals he had only encountered in storybooks. And that’s before spotting kangaroos!

“We stayed just outside Denmark. What Cape Howe Cottages lacked in farm animals, they made up for in proximity to nature. We were an easy walk from a fabulous, deserted beach. By car, Denmark was 20 minutes away, a journey that was just long enough to lull our son to sleep so that when we arrived in town, we could park up on the kerb right outside our new favourite coffee shop as our son slept in his car seat by our side. This is a luxury that only parents from a big, busy city can fully appreciate.

“Whenever it’s possible, I’d love to repeat that journey, to show my second son the farms and countryside of Western Australia.”

Get to know Western Australia's Denmark

“It’s a well-trodden option, but if I give in to my heart, I can never go past the northern side of the Blue Mountains. I was introduced to this lush patch of New South Wales in 1975, when my parents bought a small block of land atop the remote, windswept Mount Irvine on the edge of the Wollemi National Park.

“Back then, Mount Irvine was still on a shared, party telephone line. The small clutch of residents living there only had electricity connected in the 1960s, and the only water was from tanks, bores or natural springs.

“Over the years, I’ve watched this magical inland pocket of bush-meets-subtropical-rainforest endure the well-worn cycles of fire and drought. I’ve seen the Bells Line of Road (named after surveyor Archibald Bell) mature into a tourist destination in its own right, dotted with thriving new businesses such as The Hive (fabulous bread and honey, plus great coffee) and Bilpin Cider Co, alongside old favourites such as the Bilpin Fruit Bowl.

“For those in the market for pure luxury, Mending Wall (Contemporary Hotels) at Mount Irvine offers previously undreamed-of indulgence in this part of the world. Think windswept romance: Wuthering Heights’ Heathcliff and Cathy in oilskins and Akubras (iconic Australian hats).”

Get to know the Blue Mountains

Take on the Gibb River Road in Western Australia

“When I briefly met Lonely Planet founder Tony Wheeler, he told me in awestruck tones about the epic Gibb River Road journey in Western Australia. Starting at Derby and ending near Kununurra, it’s an iconic journey through the rugged, remote Kimberley region.

“I’ve been online stalking its red trails, dreaming about clambering into a 4WD and exploring every rugged inch ever since. I’d take my time too, savouring every creek, gorge and waterhole. I’d hike all the trails. Maybe even throw in a helicopter ride if I could afford it. Encounters with crocodiles? I don’t care, just so long as I’m up close to the action.”

Get to know Gibb River Road

“I'm really looking forward to getting back to Brisbane, my home town. I was last in Brisbane just before Christmas 2019 for my father's 80th birthday, and was blown away by how much the inner-city suburb of Fortitude Valley had changed.

“The tree-lined James Street retail and café precinct has dramatically transformed the vibe of what was an uninspiring light industrial area when I grew up in the city.

“Head to the breezy Calile Hotel on James Street for refined modern Greek at Hellenika, or make your way to the Ovolo The Valley and its Za Za Ta restaurant for contemporary Middle Eastern and Mediterranean fare and inventive cocktails.”

Get to know Brisbane

“I’ve never met a person who lives – or has lived – in Canberra who doesn’t adore it. Few world capitals are blessed by such an abundance of nature interspersed with most, if not all, of the bigger city allures like fine restaurants, cafés and bars.

“One of the nation’s most impressive urban lifestyle precincts, the lakeside NewActon, is home to Ovolo Nishi, one of Australia’s most architecturally stunning designer digs. On the opposite side of the city centre is burgeoning Braddon Street, Canberra’s cool café kingdom. One of the oldest and still best establishments is 23 Lonsdale Street Café, while around the corner is the strikingly designed Midnight Hotel.

“Despite all these urban delights, when in Canberra I’m forever drawn back to its nature, perhaps in the form of a bicycle ride around tranquil, tree-lined Lake Burley Griffin, or a visit to the National Arboretum, with its bonus superb vistas of the city.”

Get to know Canberra